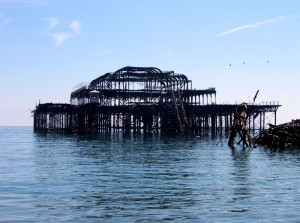 There’s a cartoon in today’s Times featuring the ghost-like metal hulk of Brighton’s scorched West Pier, cast adrift in a choppy sea. It’s being used to lampoon a political party currently in temporary residence for its annual conference at the Brighton Centre.

But earlier this month it symbolised something more positive. For when Rihanna sailed into the Paralympics Closing Ceremony on a steampunk pirate ship made of recycled metal, it included iron salvaged from the shipwrecked structure of Brighton’s West Pier.

That small detail, from among so many that night, really pleased me. It tapped into the idea of transformation, reincarnation and the phoenix, symbol of the Paralympics. And I liked it too because the Paralympics had already been awash with ‘back stories’: tales of trials and triumphs, hinted at in advance so cleverly in Channel 4’s Superhumans trailer with its intercuts of war, car crashes and hospitals – but then brought alive during those late-summer days of supreme achievement and humanity.

Stories help us to understand and connect with people and places at a deeper emotional level. We need (and weave) narratives to give experiences context and meaning, and to share them with others. That’s why a lot of our work involves stories and storytelling – finding, understanding and re-telling the stories that reveal the essence of a place.

The blackened metal of the West Pier is a sad sight that haunts those of us who live here and knew what it was: a beautiful Grade I listed structure whose minarets and wrought iron serpents echoed the nearby Royal Pavilion, built only a generation earlier. And what it could have been. But that’s another story.