Visitor attractions began in 1953. Or that at least was when John Duke of Bedford inherited his run-down ancestral pile. Some years later in his entertaining book, How to Run a Stately Home, he spilled the beans on what he had leant in turning Woburn Abbey into a business.

How many Rembrandts do you need before turning stately, he asks. None of course. Hard experience had taught that the first requirement is good loos and plenty of them. Why do people visit stately homes? Reasons vary, he admits, but a considerable majority do so because they own cars. They would feel silly if they were not driving them somewhere. A stately home provides a destination. And along with lots of loos and sufficient car-parks you have to serve good teas at a reasonable price. If you have these things, he reckons the majority of visitors will not notice if you have no house at all.

One lady visitor, having looked around a grand room with countless treasures, was asked what she liked most about it. She answered without hesitation. ‘The lino. I like it very much indeed. It’s exactly what I want for my kitchen’. Visitors like to identify what they see with their own lives, the Duke concludes,  especially with their own quite humdrum existence. 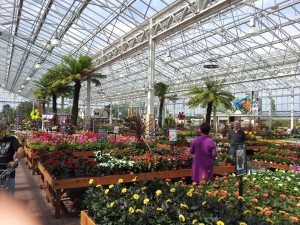 Forty years on we can the see a line of descent from the Duke’s stately home attraction – to the great British Garden Centre. The figures suggest there are far more visits to garden centres than to gardens, so I decided to check one out. I wanted to experience not just any old Garden Centre but the best – so I chose one that has won the UK Best Garden Centre title a record-breaking three times in a row. Like Woburn this is a family run attraction handed down through several generations. Bent’s huge centre near Warrington has, in its own words, ‘evolved into an award-winning lifestyle destination’.

The ‘lifestyle’ bit is prominent in the Jacuzzi section, where a nice hot tub will set you back a cool £15000. But mostly the Centre offers all the kit and stuff, books and scented candles you need for a modestly aspirational lifestyle. It’s a pleasantly sociable place to go with friends and family for aan hour or two of relaxation without too much intellectual distraction. It’s a sort of garden theme park for those well beyond the Alton Towers years. Its roots are evident in giant glasshouse full of colourful bedding plants, complete with piped exotic birdsong (which seemed a touch too exotic for Warrington). You can buy greenhouses and hosepipes, even garden statuary of a kind, especially underdressed nymphs looking a little cold in our northern climes. But where Bent’s really scores is in its eateries – its Fresh Approach Restaurant and Café nel Verde. They are really the main attraction; immense, informal and with seating indoors, in the conservatories and on the sunny terrace overlooking the pretty new lake and fountain.

Bent’s prides itself on giving its customers what they want, and it appears to be succeeding. They’ve not bothered with the stately home’s stripy lawns, pleached limes and tiring gravel pathways. But the well-used car park is being extended again.

www.bents.co.uk
As the old Duke might have said: ‘it seems all you need is a good loo, a good brew and a good view’.