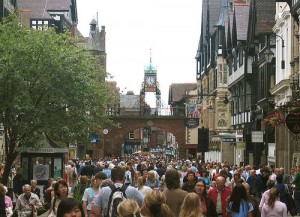 The UK SoundMap was launched last summer to identify how our acoustic landscape has altered. It is a partnership project between the British Library and the Noise Futures Network. The project asked the public to capture everyday sounds using widely available mobile technology. The crowd-sourcing phase is now complete and the recordings are being studied by experts.

What I found interesting is that by drawing on their extensive sound recording collections, the British Library has been able to compare modern street sounds with recordings made 60 years ago at the same locations. Apparently many of our streets are quieter now than in the 1940s. If that doesn’t sound believable here are some of the reasons why.

Many town centres are now pedestrianised, there are no more steam trains (some would argue a sad loss) and people whistle less (true – whatever happened to whistle while you work?). There are fewer newspaper sellers calling the editions and apparently the collective sound of leather soles is louder than the synthetic heels we all have now. Also people now use technology such as MP3 players while they walk around public places.

The concept of more tranquil places seemed a good thing until I got to that bit. Everyone who works in destinations puts great emphasis on the importance of local distinctiveness and creating great places to be in. If you are tuned into your technology instead of the place, how much do you notice about that distinctiveness I wonder? Or do you just experience it in a different way? We are all so used to being physically in one place but mentally elsewhere (on the phone, texting, listening to music) how does that effect the way we relate to the spaces we occupy I wonder.