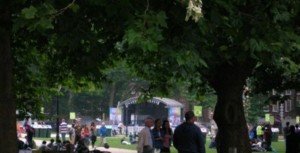 I recently visited Bristol to take part in my first award assessment with the Academy of Urbanism. The visit was to the magnificent Georgian Queen’s Square which has been restored with the help of Heritage Lottery funding. It is one of three spaces shortlisted for The Academy’s Great Places Award 2012.

As the judging isn’t yet complete, I can’t comment on the specifics of that but can share my experience of visiting the city as it got ready for the 40th Bristol Harbour Festival.

Queen’s Square was already buzzing with activity when we arrived. Against a backdrop of crews assembling stages and lighting, the continental market was in full swing, giving visitors the opportunity to buy some goodies before the festival got going.

Queen’s Square was built as a des res for wealthy merchants. Now the busy through road that once dissected the square has been removed, it is restored it to its former glory. Once again it is a des res but these days as offices for solicitors and accountants rather than as a place to live. The square is a busy thoroughfare but also a place for people to relax; an important green space in the city; described to us as Bristol’s front room. Once the office workers have gone home, it becomes a prime outdoor events space including one of several venues for the Harbour Festival.

As we explored the waterfront just a few streets away I was struck by the volumes of people promenading in the sunshine or sitting outside cafes watching the world go by. Bristol has the raw material for good festivals but that isn’t enough. You have to work at getting the space right. That is about design, management and animation. Judging by the number of people at the Harbour Festival, Bristol appears to be getting it right.

At the end of the day as I hurried across Queen Square again towards the railway station, the band had got going and people were assembled, drink in hand swaying to the music and I rather wished I’d chosen to stay for the weekend.