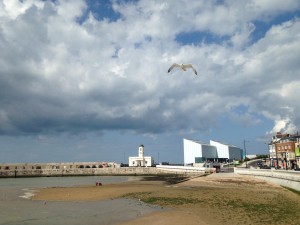 When did you last spend time skying?

“When I was a boy I used to lie for hours on my back watching the skies, and then go home and paint them,” said J.M.W.Turner. Constable called this “skying”.

Many of us “sky” when we’re on holiday. We don’t all go home and paint them, but holidays and days out can provide us with the downtime and mental space to really take in sunsets, starry nights, storm clouds, rainbows, and hazy blue summer skies.

I once found myself apologising for the cloudy weather to a group of Thai tour operators who were on a fam trip to Brighton.  They soon put me right: they found our skies fascinating after the predictability of their own. We’d do well to remember that not every tourist is in search of the cloudless blue beloved of tourism shots.

Staying at Mrs Booth’s cottage on Margate seafront, Mr Turner declared that “the skies over Thanet are the loveliest in all Europe”.  More than 150 years later, the Turner Contemporary opened on that same spot.  We visited and found people lying on the floor, skying – or at least simulating it – to look at Edmund de Waal’s mysterious and moving installation ‘Atmosphere’.

And of course the whole building has been designed to make the most of those huge skies, on this peninsula at the very edge of England.  Art critic Waldermar Januszczak describes it as “probably the most elegant gallery interior in Britain right now”. But the last word should go to de Waal: “There is no more extraordinary place to look at the sky than the Sunley Gallery at Turner Contemporary”.