With the Eurovision Song Contest just around the corner our attention will hopefully turn to more joyful news than seems to dominate recent European headlines.

With that in mind we thought it would be a great time to do the first league table for the performance of European National Tourist Offices (NTOs) on social media.

And the results are in:

Top of the European NTOs is Turkey. They are top on Facebook, Instagram and Twitter and have developed some very successful and sophisticated platforms that clearly appeal greatly to their visitors.

They are followed closely by Britain, then Germany, Switzerland and Spain who dominate the majority of top places across each of the different platforms.

But there are a number of other surprises.

On Instagram Ireland and Portugal finish 3rdand 4threspectively – a really strong result on a platform which has been growing rapidly.

Some big European destinations are lower than one might expect, Italy in particular. However the study only looked at the English language variants of NTOs platforms so countries for whom English speaking markets are not dominant may be forgiven a lower ranking. That said destinations generally have a universal Instagram account and France and Italy appear 18thand 15threspectively on that platform.

Norway is the most successful of the Scandinavian countries coming 10thoverall while Russia is well down the rankings in 39thplace. Other former eastern European countries are spread across the league table with Slovenia (22nd), Estonia (25th) and Croatia (7th) performing among the best.

The study aggregated followers across all NTO accounts on each platform and it is clear that Facebook remains the most dominant channel with 34m followers for the 48 countries reviewed while Instagram produced 6m followers and Twitter 3m.

3.5 million! That is more than half of all European NTO’s followers on Instagram combined. And the really interesting thing is that it didn’t take lots of money and people. In fact any destination wanting to develop some ideas could do a lot worse than take a look at the example from the team at Tourism Australia. 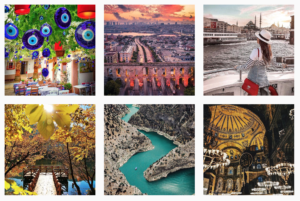