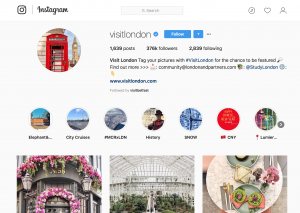 Social Media has been around long enough for most destinations to have worked out that it is vital to their marketing and sales activity, part of their strategy and in many cases central to it.

So how well are the different destinations around the UK doing? We decided to take a look at Instagram and review how different towns and cities were using this one platform to promote their destination brand and reach audiences.

The results are quite illuminating. We looked at 30 of the UKs top towns and cities according to data from the International Passenger Survey and Great Britain Tourism Survey.

Just 10 Towns reviewed had more than 10,000 followers and only 5 had produced more than 1000 posts on Instagram. No surprise that London is top of the ‘Follower’ table a long way ahead of Edinburgh with almost twice as many again as Manchester. But then four destinations all closely fighting it out for 4ththrough 7thspot are Belfast, Bristol, Bath and Glasgow with Brighton, Liverpool and York all close together in 8ththrough 10thspot.

Here is the List of the Top 10 by Followers:

We looked at the correlation between posts and followers and unsurprisingly found that there is of course a very close relationship between the two with a correlation coefficient of +0.875. But the rank order did change somewhat and shows that some destinations are working extremely hard on their content. Top of that table is Edinburgh closely followed by Bristol and Bath. Aberdeen makes it in at 4thspot (even though they aren’t in the Top 10 for followers) and Nottingham and Leeds get in the Top 10 too.

Of course posts and followers don’t necessarily mean more visitors now. But with Instagram becoming a dominant power in travel marketing, ignoring its potential will limit a destination’s appeal to new and emerging travellers.

In a number of recent projects, including for 1066 Country, Brighton & Hove, County Wicklow and Arctic Coast Iceland, we have been able to identify some clear opportunities to generate greater impact through close collaboration and partnership that makes the most of digital marketing platforms such as Instagram.

Instagram now has 800m users worldwide with 60% of users between 18-24 and 90% of all users under 35. Its use has doubled in the last 2 years and there are about 80m images uploaded every day on the platform.

Engagement with brands on Instagram is reported to be up to ten times higher than on Facebook.

And all of the consumer trends research points towards the growing importance of images and video as content which drives engagement and interest.

Of course when content used to depend on the DMO producing copy and images to put in their brochure or on their website it was both time consuming and costly. But now every visitor and every local tourism business has the tool in their pockets to produce good quality images via their smartphone.

The really smart destinations are recognising that their social media strategy is about unlocking the potential of their own businesses and existing visitors – very much as curator or conductor of content rather than producer.

And while those at the top of the list might well take a well-earned pat on the back, bear in mind that there are cities and countries around the world that are delivering outputs that all but dwarf these results. Consider the small town of Bergen with 33,000 followers, Copenhagen with 194,000 and Melbourne with 542,000 followers.

We love to help destinations find ways of telling their own story. If we can help you find and tell yours, please do get in touch.