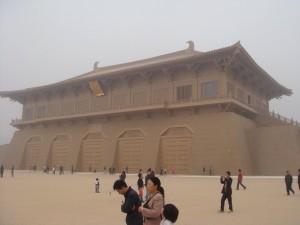 Graham is on a study tour exploring China this month. Communications with home are good but uploading a blog is not possible, so Blue Sail’s intrepid explorer has asked me to share this blog with you. We keenly await Graham’s next installment.

I’ve just become the first Western visitor to China’s newest and possibly largest heritage attraction. It’s the Daming Palace site and with my travel companions and several hundred thousand Chinese I visited the site on its opening day.

You have to admire the vast ambition behind it. The terracotta warriors are just a few miles away and the authorities calculate the new attraction can persuade visitors – Westerners especially – to come to Xian and stay longer. The park is still a work in progress with some displays not quite working and an uncomfortable lack of lavatories on opening day. We saw no other Western faces and were ourselves objects of some curiosity.

But the resources being poured in are simply vast and I’m pretty sure Daming Palace will eventually become a fixture on the circuit and another building block of China’s bourgeoning international tourism offer.